The end of large-scale asset purchases by the Federal Reserve to implement quantitative easing was announced on October 29. While the Federal Reserve will not decrease its extraordinary holdings of securities, it will not increase them either. By coincidence, this came at about the same time I was giving a talk in Cork, Ireland about quantitative easing by the Fed and by the European Central Bank.

There is widespread misunderstanding of how the Fed implements quantitative easing and the implications for the economy. (One particularly careful but ultimately unsuccessful attempt is “Must `Quantitative Easing’ End in Inflation?”.)

Quantitative easing is a policy of large-scale purchases of assets by the Federal Reserve. The Fed has increased reserve balances from about $13 billion before the financial crisis to about $2.7 trillion at the end of October 2014. If that’s not a big increase, nothing is.

Many have been surprised by the fact that quantitative easing on this scale has not been accompanied by substantial inflation. As a general rule, increases in bank’s reserves are accompanied by increases in the quantity of money and followed by higher prices. This seems not to be the case for the United States. Why? 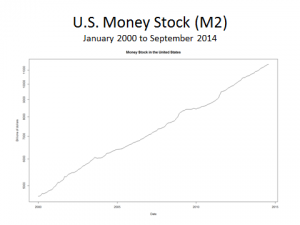 There normally has been a fairly close relationship between purchases of assets by the Fed and M2. What changed?

First, the Federal Reserve now pays interest on reserves held by banks at the Federal Reserve. This need not explain the disconnect between the Fed’s purchases of assets by itself, but it does when combined with a second observation. 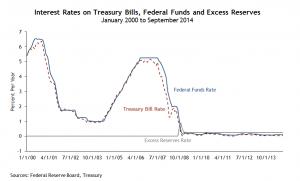 There are many things that can said about this, but the fact that the Fed is paying more than the Treasury for short-term funds is sufficient to explain why M2 has not increased. Both interest from the Treasury and from the Fed are risk free; balances at the Fed are better since they pay a higher interest rate. Banks have every incentive to hold excess reserves rather than Treasury bills.

At least so soon after the financial crisis, banks are not likely to want to fund long-term loans by this very short-term funding. (Overnight funding of asset positions is exactly what got investment banks into difficulties in the Financial Crisis of 2008-2009.) The Fed ends up with higher reserves funding its asset purchases with no apparent effect on M2 as a result.

The failure to expand bank loans is even less surprising since about half of the increase in reserves is held by U.S. branches of foreign banks. Most of these banks are not in the business of making car loans or similar loans in the United States and are not likely to go into that business simply because they borrow and lend short-term funds as an arbitrage. Even if they were so inclined, they are not likely to be inclined to fund relatively long-term assets by borrowing very short term, any more than U.S. banks are.