If there is a monopoly in mining bitcoins, then Bitcoin fails to achieve a design goal of having an open process which does not rely on one trusted entity such as a private firm or a central bank. The monopolist must be trusted or else Bitcoin falls apart.

Miners solve a computational problem: finding a hash less than or equal to a target value. Miners are participating in a contest to be first and the winner takes all.

Miners face the risk every period that they will not win; if they lose, they receive zero. Miners reduce this risk by combining in pools of miners and sharing the payoff when a member of the pool finds a hash less than the target value.

By itself, if all miners are risk averse, the optimal strategy is to form a single mining pool. Furthermore, even if there is more than one pool, a risk averse miner is better off joining the biggest pool if all the pools are the same in all other respects. The bigger the pool, the less risk an individual miner faces. 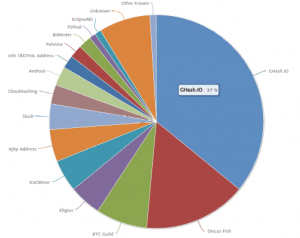 Distribution of mining for four prior days on July 4, 2014

There is a tendency toward a natural monopoly in mining due to this pooling of risk in mining pools. This does not imply that a monopoly is an inevitable result or even a particularly likely one. After all, there is more than one pool. The attached graph shows the distribution of payouts on July 4, 2014 for the prior four days. At times, Ghash.IO has included 40 to 50 percent of all mining activity.

Why is there more than one pool? One answer would be that mining is on its way to becoming one pool and it just has not gotten there yet. A different answer consistent with differences across pools is that pools have different payout schemes and other characteristics which appeal to different miners. If differences across pools are the explanation for there being more than one pool today, there is no necessary reason there ever will be just one pool. A third answer would be based on the behavior of pools that become more dominant. As a pool becomes more dominant in miners’ computations, its terms to miners become less attractive. Possibly this third answer is part of the explanation as well.

All of this is assertion with the underlying argument. The following discussion inevitably gets somewhat complicated to support the assertions. I have tried to make it as clear as I can and avoid technical details.

The variance of returns from mining alone is substantial. Illustrative calculations show how high the variance is.

One bitcoin mining calculator shows that a mining rig with a hash rate of 1,650 Gigahashes per second would break even on its initial outlay of $1495 after 86 days if it receives the expected revenue each and every day. It also shows that the expected time for the miner to find a block on his own is 507 days. If this block pays off roughly $600 for each of the 25 bitcoins, this is a payoff of $15,000. The implied variability in the time to payoff is huge.

This can be seen in a way which illustrates the issue more directly. Suppose that the difficulty were constant at 16,818,461,371, the total number of mining Gigahashes per second (Ghash/s) were constant at 143,627,333 Ghash/s and the payoff of 25 bitcoins also were constant with a price of $600 per bitcoin. (Other than the prices, these are the parameters on July 4, 2104 and the price is roughly $600. Success in finding a winning hash would generate a payoff of $15,000. Nice. Suppose that a miner mines at the rate of 1,650 Ghash/s. This miner has a probability of 0.00115 percent of finding the winning hash value in any ten-minute period.

Mining in a pool reduces this variance. And the bigger the pool, the more the variance is reduced.

In the limit, if all miners belonged to one mining pool and it always took ten minutes to find a hash less than or equal to the target, every miner would receive a fraction of 25 bitcoins equal to their effort every period. There would be no variability in return. The miner above would receive 17.23 cents every ten minutes, or $24.81 a day. While not grand, after a year this is $9057.19, which is not trivial given the likely outlay. This overestimates the actual likely revenue because the difficulty increases over time and the payoff in terms of bitcoins decreases, but the numbers illustrate the point. If everyone is in one pool, the risk of losing the contest to produce a successful hash is zero.

Even if a pool does not include all miners, the variability of the return will be less the larger the pool.

In reality of course, belonging to a pool will not reduce the variance completely. I have abstracted from the possibility that a hash less than or equal to the target will be found in less than ten minutes or more than ten minutes. This is common risk and pooling risk across miners will not reduce it. It is just there in the environment. But pooling risk across miners can reduce the risk that an individual miner will face because they may not be first.

The contest to find the winning hash is affected by the number of hashes that can be done on hardware run by individuals and will be affected by downtime which can be shortened by skill. Still, in the end, the search for a hash reveals nothing about miners themselves.

Finding a hash less than or equal to the target does serve useful functions in the bitcoin economy: 1. finalizing transactions; 2. distributing new bitcoins. Those are quite important.

It now would almost be traditional for me as an outsider to say that Bitcoin must change its operation to deal with this difficulty.

I’m not going to say that. Rather, as I indicated in the first part of the blog, I think that other factors will prevent mining from being monopolized. Indeed, for reasons I indicated in my previous blog, I think that it is important that most pools be identifiable and develop reputations. It’s the “unknown” mining pools that are more likely to cause problems than GHash.

Sorry for this being so long but I don’t see how to make it shorter.

2 thoughts on “Are Bitcoin Mining Pools a Natural Monopoly?”

This site uses Akismet to reduce spam. Learn how your comment data is processed.